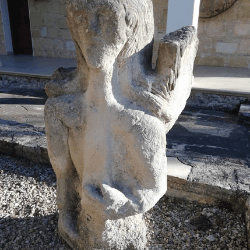 The antiquities that have been discovered in Amargetis are especially famous for the sculptures and inscriptions from the bases of statues, both in the Hellenistic and Roman eras. According to the “inscriptions-tributes” there was a temple dedicated to the god Apollo Melanthios. Important finds are today, among others, in the Metropolitan Museum of Art in New York, in the Archaeological Museums of Paphos and Nicosia. A team of archaeologists from the University of Graz in Austria officially began excavations for the sanctuary of Apollo Melanthi in Amargeti, in October 2019.

Check out the offers we are currently providing.

This website uses cookies to improve your experience while you navigate through the website. Out of these cookies, the cookies that are categorized as necessary are stored on your browser as they are essential for the working of basic functionalities of the website. We also use third-party cookies that help us analyze and understand how you use this website. These cookies will be stored in your browser only with your consent. You also have the option to opt-out of these cookies. But opting out of some of these cookies may have an effect on your browsing experience.
Necessary Always Enabled
Necessary cookies are absolutely essential for the website to function properly. This category only includes cookies that ensures basic functionalities and security features of the website. These cookies do not store any personal information.
Non-necessary
Any cookies that may not be particularly necessary for the website to function and is used specifically to collect user personal data via analytics, ads, other embedded contents are termed as non-necessary cookies. It is mandatory to procure user consent prior to running these cookies on your website.
SAVE & ACCEPT